The
Introduction To Metaphysics

Metaphysics Definition 3 is another step on your spiritual journey. 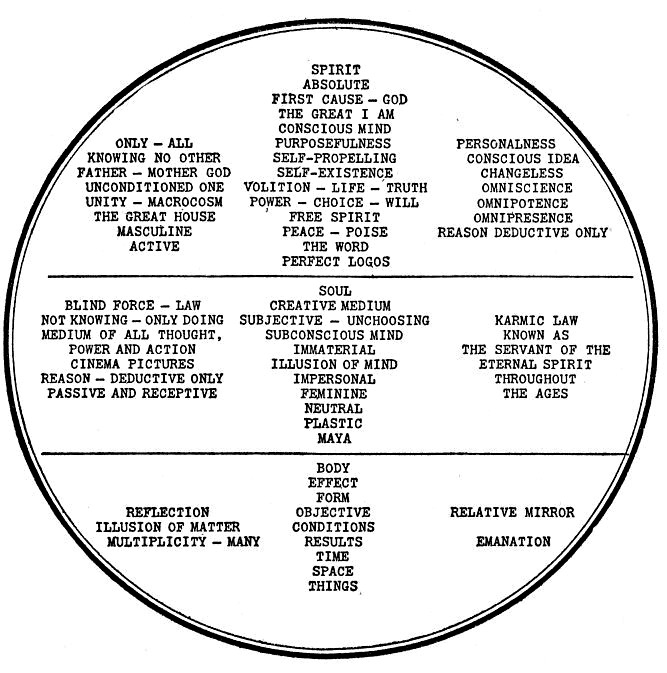 BODY: The entire manifestation of Spirit, both visible and invisible, is the Body of God. Within this One Body of God is included all lesser bodies. This One Body, coupled with the Intelligence running through it, is called the Son, or the Second Person of the Trinity. This, of course, includes man, both visible and invisible. It also includes every gradation of consciousness from the simple to the complex, from a cell to an archangel. In short, it is the entire manifestation of Spirit on any and all planes. "In my Father's House are many

Mansions. We do not, of course, see all these mansions, but science has revealed to us that many exist which we do not see, and revelation has shown that the Universe is Infinite. "For we know in part.

EFFECT: That which follows cause. Effect is that which did not make itself, but which must have a power back of it causing it to be. All manifestation is effect and all effect is subject to its cause. The Creator is greater than His Creation. Everything that we see, touch, taste, feel, hear or sense with the physical senses is an effect. "Things which are seen are not made of things which do appear." This means that what we see comes from what we do not see.

FORM: Form is definite, the result of a definite idea. Form is real as form, but is not self-conscious; it is subjective to the power that created it. Forms come and go, but the power back of them remains forever and is changeless. Form is temporary, but Mind is Eternal. It is necessary that Spirit should manifest in SOME KIND OF FORM in order that It may come into Self-Expression through Self-Realization. This is the meaning of that Creation which is eternally going on.

OBJECTIVE: Means the object, the external, the effect.

CONDITIONS: The result of causes, another word for effect.

RESULTS: What happens as a necessary result of the law of cause and effect. Results follow causes mathematically.

TIME: Dean Inge says that "Time is a sequence of events in a Unitary Whole." This is an excellent definition; for, of course, time is not a thing of itself; it is simply a measure of experience in eternity. Time does not contradict Eternity, but allows It to become expressed in terms of definite experience.

Time is necessary since it allows experience to take place within the One, but time is never a thing of itself. It is really impossible to measure time; for yesterday is gone and to-morrow has not come, and to-day is rapidly slipping into the past. If we were to attempt to put a finger on any period of time it would be gone before we could point to it. But, illusive as time is, it is still necessary to experience.

SPACE: Space, like time, is not a thing of itself, but is only the outline of form. It is a relative distance within the Absolute. Space, also, is necessary to the expression of Spirit; for without it no definite form could be produced. We must not be confused over the ideas of time and space, as they are not things of themselves. They are entirely relative, but none the less necessary.

THINGS: Mean forms in time and space. Things are always results and never make themselves; they are the objectifications of Spirit. Things are necessary to the manifestation of Spirit. They are the result of the Self-Knowingness of the Word of God. Things vary in size and shape, in time and duration, from the planet to the peanut, from a moment to an eternity.

REFLECTION: The world of matter reflects the Thoughts of God.

MULTIPLICITY, MANY: From One come many. From Unity comes multiplicity, but multiplicity does not contradict Unity. It is like the soil from which come many plants. We grow many plants from one soil, but the Unity of the soil is never disturbed in the least. So the One Mind, working through the Creative Medium of the Universe, produces many things.

RELATIVE MIRROR: Both the Absolute and the relative are reflected in the mirror of matter.

EMANATION: Projection of Spirit into form.

"All are but parts of One stupendous Whole,
Whose body Nature is, and God the Soul."